Both Lonely Planet and people we met in Aleppo said that Beit Sissi (Sissi House) was the best restaurant in town, so our first evening in the city we went there.

At this point we had realised that mezze was nicer than just a maincourse each, and that having both was too much food, so we usually had only mezze for our meal.

We were actually a bit disappointed with Beit Sissi. There were only Western people in the restaurant, and that is not a good sign in my book. Of course I don’t mind being in the same restaurant as other Westeners, but when you’re looking for the real thing it is usually not found among the tourists.

The food was good, but far from the food we had in Naranj, but I guess that is our own fault for starting with the best restaurant in the country. 🙂 They had one dish here, that was excellent though, the sujok; spicy sausage rolled in bread and fried. Also the stuffed aubergines were nice, but the rest of the food was mere ok. 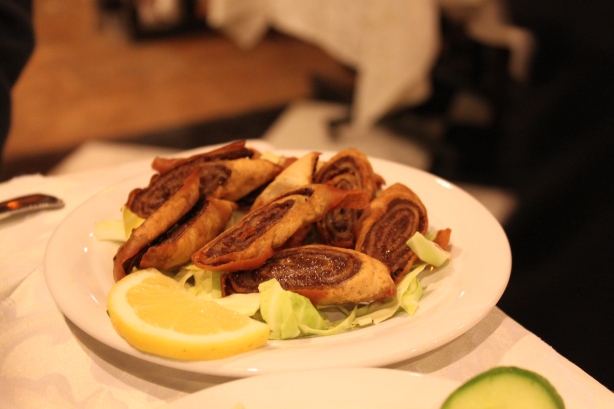 All the dishes were decorated with chopped iceberg lettuce, very 70s, and it felt like the restaurant was stuck in time a bit, and lived off it’s past good reputation. A pity, because it had potential to be something greater.

The tabbouleh was not as good as Naranj’s, way to sour.

This entry was posted in RESTAURANT FILE, TRAVEL. Bookmark the permalink.